Linking to pages and resources on this site is encouraged, but the links MUST be placed on a publically-accessible page. Placing links behind any form of login or access restriction is strictly forbidden.

Converting the Volvo Amazon or 1800 from dynamo to alternator


There seems to be a degree of confusion over exactly what is involved in converting a Volvo Amazon or 1800 from dynamo to alternator from the electrical point of view.

There need not be, because it is very simple. The wiring for either unit is almost the same. Shorn of all unessentials, the wiring diagram is given here: 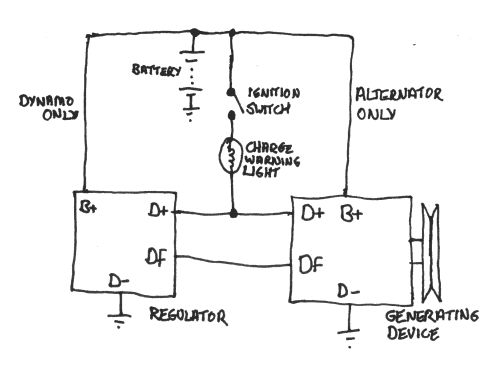 The only difference is that the B+ terminal is on the regulator for a dynamo system and on the alternator for an alternator system.

It may readily be seen that the conversion is simply a matter of taking the dynamo and dynamo regulator off, bolting the alternator and alternator regulator on, and connecting the existing wiring to the appropriate terminals.

Do not be confused by the apparent greater complexity of the wiring diagrams in the Volvo workshop manual or other such sources. They're just confusing because they have a lot of extra information which is not relevant to the job in progress and because of the way they are drawn. The above diagram strips out all the redundant information and is drawn as simply as possible.

I make no comment on the debate over whether the alternator should be installed in the same position as the dynamo (manifold side) or in the position in which Volvo installed alternators on four-cylinder models (distributor side), other than to note that installing it in the same position as the dynamo avoids any need for extending the existing wiring to reach the other side of the engine and is therefore simpler.


Back to Pigeon's Nest


Be kind to pigeons